Users subscribe to newsletters for various reasons. Someone expects the mail to become a useful source of information in this way, while someone just wants to get a discount on a product or win a ticket to Amsterdam. In all cases, subscribers show an interest in the company, which needs to be fed regularly. If you don’t do this, the subscriber base will eventually decrease – one part will unsubscribe, the other will stop opening emails.

You can return “sleeping” subscribers through a reactivation campaign, which allows you to awaken interest in the mailing and makes it more effective. How all this works and why it is necessary – we will tell you in today’s article.

To understand who the “sleeping” subscribers are, let’s deal with the entire life cycle of readers of any newsletter. Yes, it is customary to divide the audience into several types:

This is how we can conclude: readers start their journey from the active side or immediately from the dead side, if they subscribe and instantly forget about newsletters. Active and mature audiences can turn into dormant audiences for a variety of reasons.

Why does a “sleeping” audience appear

The reason for the appearance of such an audience related to interests is one of the most obvious, but it is not only because of this that they can forget about your newsletter. Here are a few more reasons why this might happen:

As you can see, there are quite a few reasons why a subscriber has become a “sleeper”, but even such situations can be resolved. The main thing is not to wait for the moment when the reader becomes a “dead” audience.

How to properly carry out reactivation, we will consider a little later, but for now let’s deal with its advantages.

What is the benefit of reactivation

At first glance, it may seem that reactivation is an unnecessary process that only takes time. After all, it is better to spend it on getting new subscribers than waking up old ones. On the one hand, yes, but it will be easier to wake up “sleeping” subscribers: they are already familiar with your company and may show interest again. And the reactivation process itself will be much cheaper than any advertising campaign – it is enough to launch a series of letters, and part of the audience will return.

Also, you can immediately start earning on “sleeping” subscribers. After reactivation, they may be interested in advertising campaigns that they did not know about before. In addition, it will allow you to improve the reputation of the domain – there will be more message openings, a lower percentage of unsubscribes, and the letters themselves will be less likely to end up in spam.

We are launching a reactivation email campaign

Reactivation mailing is a series of letters aimed at restoring inactive subscribers. Let’s consider the main steps of its implementation.

Before proceeding to the reactivation of “sleeping” subscribers, it is necessary to understand why they became so. Perhaps the newsletter was not interesting or the reader simply forgot about you. Go back to the information above where we discussed why a subscriber can become “dormant”. Think about why this happened in your mailing and write everything down in a notebook. This will help you focus on a specific cause and direct all your efforts to its solution.

Answers to the following questions may also help you: How long have you been subscribed to? What kind of activity does it have: open rate, link conversions, and so on? When did the user become inactive?

As a result, you can divide the audience into several categories:

Once you have determined which users are being reactivated, proceed to the next step.

There are two of them:

What to write about in such letters? Let’s look at some examples that will help you create a reactivation email.

Letter with a proposal to change the mailing frequency

Not all subscribers like to receive and read emails every day: some simply do not have time for this. Therefore, you can specify how many letters subscribers want to see per week or month.

Surveys can be launched, for example, on social networks or in the nearest newsletter:

A letter with a proposal to change the mailing parameters

It is likely that your subscribers are no longer interested in the newsletter. Suggest other options for this category. This can also be done through a small survey.

This is how it can look in the newsletter:

A letter asking why the subscriber became inactive

If you still don’t understand why your mailing stopped being popular, ask the person directly. Such letters work well with subscriber bases that open but have stopped buying. Perhaps you will learn about new problems that you did not know about, for example, you have difficult delivery, low-quality assortment, and so on.

As we said above, launching the digest will help get subscribers out of quarantine. Tell what has happened to you recently, and also invite readers to study the material that passed them by.

A letter with a gift or discount

Such emails are often sent several times after the last interaction. Try to use two such letters: the first will be sent to everyone who gets into the inactive database, and the second – to those who did not open the first. With the help of these letters, you will understand whether subscribers are waiting for profitable offers, or whether they have already become “dead”. 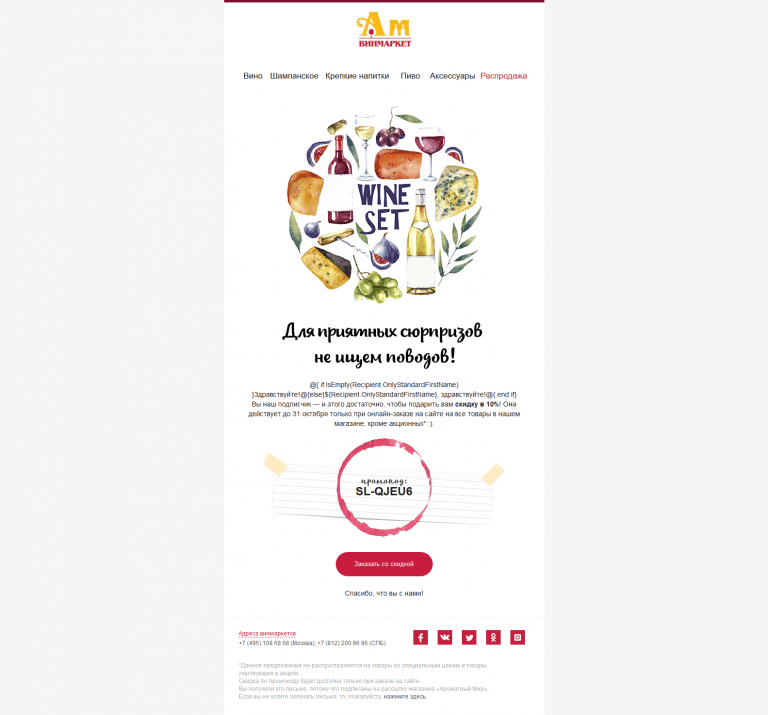 If “sleeping” subscribers do not respond to such messages, then they can be woken up in another way – push messages. These can be messages in the browser or mobile application, as well as SMS.

Here is an example of a rip off from reactivating subscribers: 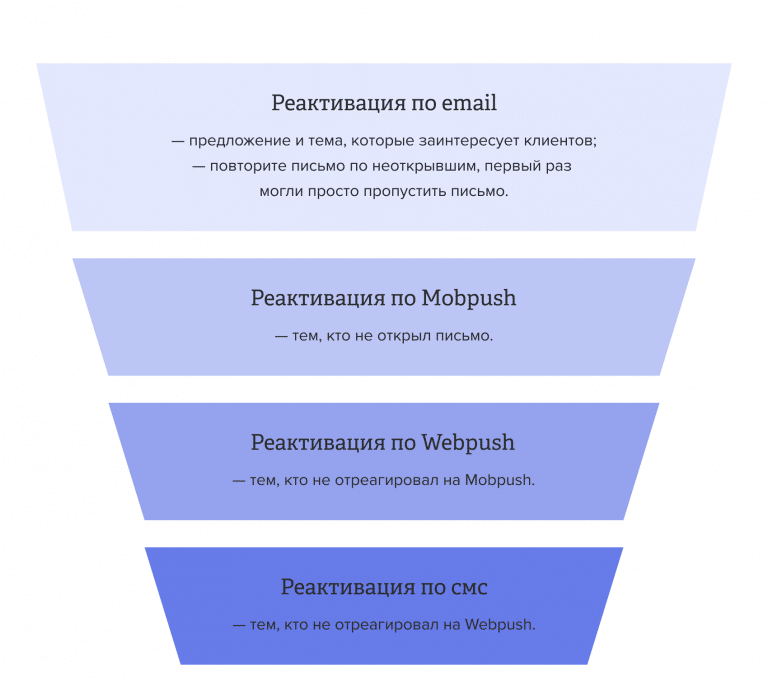 Before proceeding with a full reactivation, we recommend that you first run a test mailing to help you determine a more effective strategy. Consider in it not only the content, but also the time of sending – it is possible that no one reads your messages because of it.

Also, do not forget about the subject of the letter – it should certainly attract attention. Subscribers have already forgotten about you, and now they need something provocative. This can be a topic related to recent events, a big sale, and more. Test different options, and then you will find something that can wake up sleeping subscribers.

What to do after reactivation

After the reactivation email campaign, be sure to delete the addresses from your database that did not respond to any email. Such subscribers, most likely, cannot be returned and it is better to say goodbye to them finally, so as not to waste resources. Although there will be fewer subscribers, you will still be able to build effective email newsletters. Your base, on the contrary, will become fresher thanks to an active audience.

And to minimize the appearance of new “sleeping” subscribers, follow the recommendations:

Reactivation is an ongoing process that should be involved in any email campaign. It will help you bring back the “sleeping” audience, save money on replenishing the active base, and also preserve your reputation and increase your income due to awakened subscribers.

Telegram has launched a service for buying usernames