Skip to content
Home Articles What is a stablecoin

Cryptocurrency itself has high volatility, meaning its price depends on many factors and changes quickly. Having a couple of tokens in your hands, you can both increase your capital and lose everything in a matter of hours. But then how to keep money in cryptocurrency and get more confidence that at any moment it can be exchanged for rubles or dollars, without the risk of losing it on the exchange rate? A stablecoin was created specifically for these purposes, which will be discussed further.

What exactly does the term “stablecoin” mean

The literal translation of this word from English sounds like “stable coin”. This means that the token of such a cryptocurrency is always equal to 1 dollar or another selected fiat currency (more often, it is attached to the US dollar). Suppose you bought 1 USDT for 1 dollar, so in the future you can sell it for 1 dollar and withdraw the money or transfer it to another cryptocurrency at the current rate.

However, not everything is so simple. There are quite a large number of stablecoins, all of them have different security, and also, as practice shows, they are not as reliable as many people think. Therefore, I suggest to dwell on this topic in more detail and analyze the main points.

What is secured by a stablecoin

The first question that becomes relevant when getting acquainted with stablecoins is related to their security. That is, why is the notional 1 USDT or 1 USDC always equal to 1 dollar, who provides the backing, where is the paper money or bills that support this backing kept? For each stablecoin, the situation is different and far from always transparent. Let’s break down a simple collateral example from the USDT example.

On the Internet, you can find a graph showing the market capitalization of USDT or any other stablecoin. At the same time, it almost always grows and only in some areas becomes smaller, and then recovers. If back in 2017 the capitalization of USDT was about 100 million real dollars, now this amount reaches 70 billion. It turns out that if there are 70 billion USDT, then there must be 70 billion American dollars somewhere, if each of them is attached to a cryptocurrency. 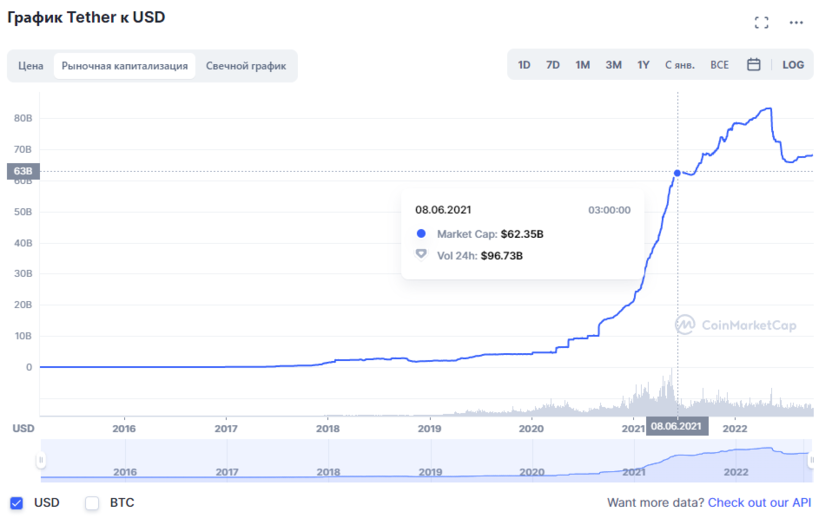 Formally, everything is so, but this applies to other stablecoins, which openly declare that they have their own paper money stored in certain bank accounts for all digital assets. However, in the case of the same USDT, things are a little different, as can be seen in the following image. 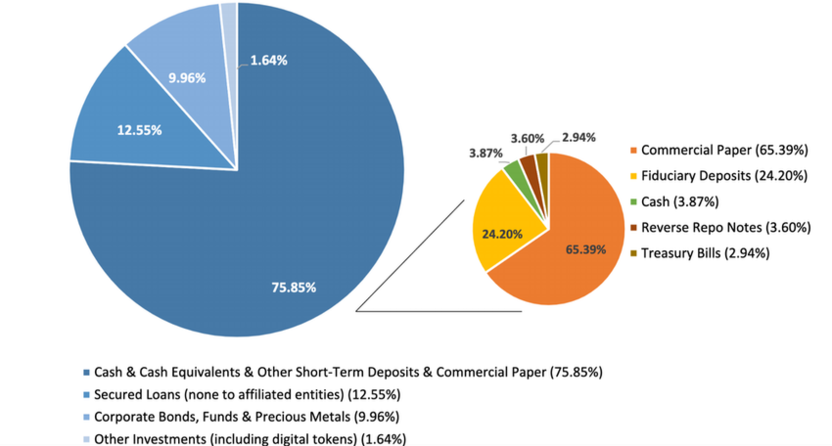 This is an open statistic provided by Tether in 2021. The proportions may change in the future. From this graph, we can see that the largest percentage of this token is backed by securities. These are usually US Treasury bills, which are a very reliable asset that can only be in trouble if the country’s banking system collapses.

Another few dozen percent of the total capitalization of USDT is on deposits in banks and only a small percentage is kept in the form of cash. At the same time, the developers do not say exactly which banks the currency is in. There are only a few materials from which it can be understood that these are Bahamian banks.

All of the assets that you learned about when learning about your chosen stablecoin have their own level of risk. Accordingly, the more reliable collateral, the more stable the cryptocurrency and more reliable in terms of long-term storage of savings in it. If we take the situation with USDT, then on the next screenshot you can see an interesting diagram, which shows the reliability of assets (from green – the most reliable in the form of securities of US banks to red – questionable securities or banks).

What is the difference between stablecoins

The most obvious difference between several stablecoins is the currency to which they are pegged. The same Tether company provides pegs not only to the dollar in the form of USDT, but also to the euro, the Chinese yuan, and even gold. The choice of coins in this case depends only on which fiat currency you trust more and how transparent the security structure is (usually written in the stablecoin whitepaper or published in reliable sources such as the Binance blog). 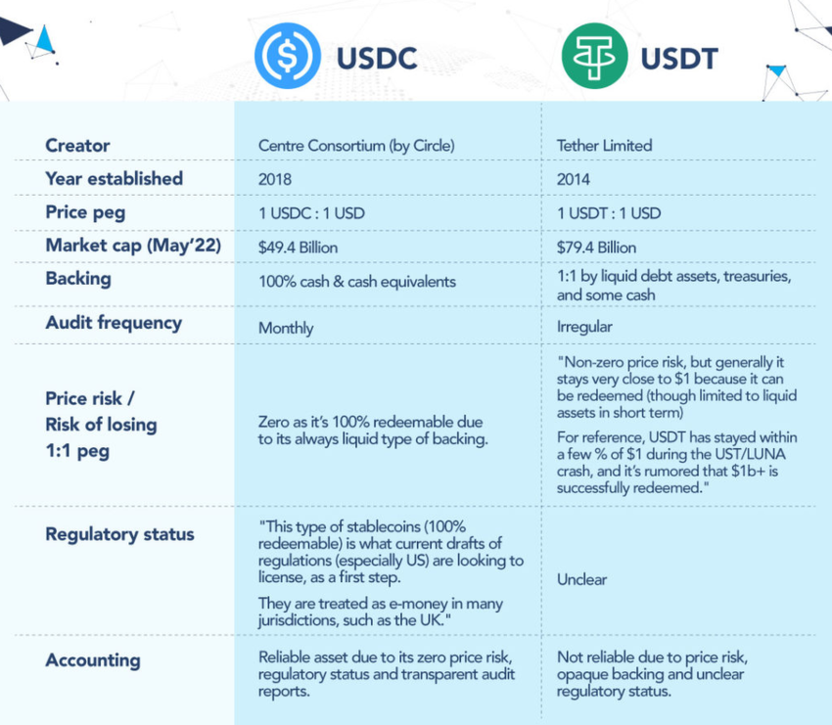 At the same time, different stablecoins operate on their own blockchain, have their own fees, translation times and other factors that affect exchange or storage. The same USDC is most often translated on the Polygon network, has a minimal commission and is very often used in various Web3 projects along with BUSD, a stablecoin from the Binance exchange. I do not give specific advice on choosing a stablecoin if you intend to keep your savings in it or use it for deposits on exchanges. You have to independently understand the documentation and compare different coins, choosing the most reliable one in your opinion.

Why is the stablecoin rate falling?

If you look at the graphs of USDT/USD, BUSD/USD, USDC/USD, you can see that the volatility is most often 0.01%, and the price is almost always kept 1 to 1. However, there is an unprecedented case in the history of cryptocurrency, which even learned about those who have nothing to do with this financial world. The UST stablecoin has lost 99% of its value in a very short period of time. Instead of a price of 1 dollar, it dropped very rapidly to 1 cent. Those who kept money in this stable coin lost all their savings if they did not withdraw them in time at the beginning of the panic. Together with UST, the LUNA coin, which worked on the same network, fell. 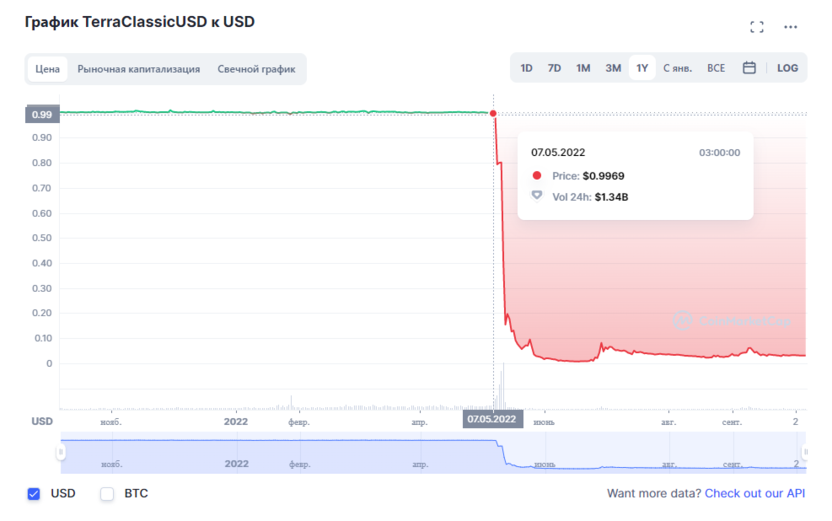 This is due to the fact that there was speculation on the market by one person or a group of persons who bet on the fall of LUNA and UST and sold the previously borrowed 75 thousand bitcoins. This caused a short-term drop in the rates of both coins and led to a panic that snowballed and caused the coins to fall even more. Someone sold a few hundred million dollars worth of UST, liquidity plummeted, and that caused the stablecoin to simply decouple from the dollar. It was not possible to restore this connection, then a heavy load on the network began due to a large number of transactions. The liquidity conclusion became the maximum, and as a result there was a depreciation of 99%.

This is all due to the Anchor lending system that worked with UST and the algorithmic peg of the token itself, which is mostly based on trust and constant market activity. Most likely, the collapse of the cryptocurrency was deliberate and planned, and the creators were not ready for such a development.

If we talk about the same USDT or USDC, then in this case the reserves are stored physically in the form of cash, backed by securities or deposits in banks. It will not be possible to collapse the entire ecosystem so easily, since the fund will have enough funds to pay them to everyone who is going to exchange crypto for fiat. However, there are still risks, and you should not forget that not all cryptocurrency is considered the most reliable means of storing your savings.

In this article, you learned the basic information about stablecoins, you saw that they are tied not only to the dollar, but also to other fiat money or gold, and you understood why resonant collapses in the cryptocurrency market occur. All this information will help you become more aware and decide for yourself whether you should use the same USDT or BUSD not as a means of payment, but as one of the directions for storing savings or deposits for deposit on different exchanges.