Domo presented the tenth annual Data Never Sleeps report. It gives annual averages of how much data Internet users consume every minute. At the end of the decade, it was also found that interactions on some digital platforms increased almost 17 times.

According to the data on the infographic, it can be concluded that every minute an average of 16 million text messages and 231.4 thousand e-mails are sent around the world. During the same time, people send 347.2 thousand posts on Twitter and upload 500 hours of videos to YouTube. 1.7 million pieces of content are also published on Facebook* and 66,000 new photos on Instagram*. 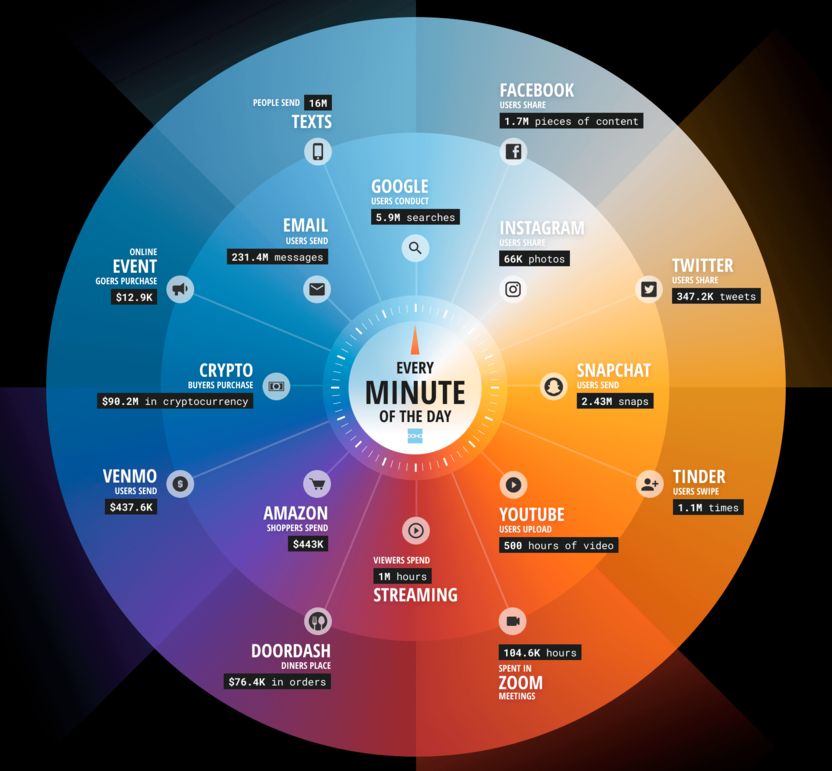 As for other sites, 5.9 million search queries are sent to Google in 60 seconds, Zoom users conduct 104.6 thousand hours of video communication, and viewers consume 1 million hours of content in online cinemas. People spend $443,000 on the Amazon online platform, and $90.2 million worth of cryptocurrency purchases are made in the blockchain.

All of these Domo results were compared to 2012 figures. At that time, 2 million queries were sent to Google every minute, and about 100,000 tweets were posted. The biggest difference is recorded on YouTube and Instagram*. Moreover, if 48 hours of videos were uploaded to the video hosting that year, then the rate of publications per minute in the social network at that time reached 3.6 thousand. Only the flow of e-mail messages has not changed so much – in 2012 there were 204 million of them.

* Belongs to Meta, recognized as an extremist organization, and is prohibited on the territory of the Russian Federation.