Skip to content
Home Articles We are creating a converter calculator based on React. Part 9: Connecting Redux and Router

Let’s talk about important and popular third-party libraries for React: Redux and Router. Why are they needed and how can these libraries be applied in practice. I will use the example of the calculator that we created in the previous parts of the cycle.

Redux is a third-party library for managing the state of JavaScript applications. You already know how component states work in React. So Redux allows you to transfer these states from a bunch of different elements to a single control system that is separate from other project files, but always within reach. That is, the state of multiple components can be stored in a single repository. It can be updated from any React component and displayed in any React component.

Redux allows you to simplify the complex structures of passing data from parent components to descendants and from descendants back to parents.

It’s hard to say how appropriate it is to use Redux in our application. A lot of copies have already been hacked on this topic, and I will not repeat articles on the topic of how important it is to use certain technologies only in those situations when they are really needed. I’ll just show a basic example of how Redux works, and you can decide for yourself if you need it here. Or you can simply learn how to work with Redux and be able to use it in other applications.

First, you need to download the utility itself as an npm package and pull all dependent packages along with it to fully configure the basic version of the state store.

After both commands work, you can proceed to the settings directly in the program.

To begin with, we need to decide how Redux will be used in general and what we need it for. Since the number of Redux application scenarios is limited only by the imagination of programmers, no one can name the specific reasons for using Redux.

In our case, Redux will store the history of any calculations. Whether calculations in the calculator or some operations performed by the converter. That is, our History field will turn into a public space into which you can transfer information from any mode of operation of the program to save the received values.

With this information in mind, let’s move on to creating our first Redux repository.

First, we create the store.js file and save it in our project. This will be a JavaScript document containing the state of the components.

As the content of the store.js file, you need to specify the basic Redux configuration with references to related components and an object that stores the state of the components.

Having finished with the repository, we move on to creating a state change method. It will be in the historySlice.js file that we will create in the root of the project. 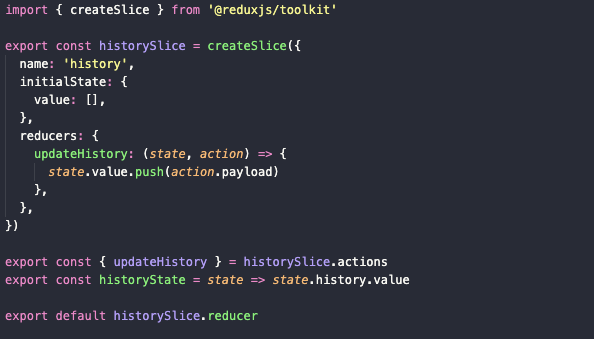 After declaring each element and describing the state management method, it remains to export it to the external environment to then import it into the application.

done You can go to the second part.

We connect Redux to our program

We have an external state, but it is currently not being used in any way in our application. We will change it from two components of our program, and it will be displayed in the general part of the interface, visible when using both the calculator and the converter.

To work with Redux states in a React application, you need to import the store and the Provider component into the root file of the application (in our case, it is index.js).

Provider is a parent component-wrapper, in which you need to put all the code of the application in its entirety. We used to build ChakraProvider. Therefore, it should also be placed inside the Provider from Redux. It is also important not to forget to pass store as an argument to Provider.

First, let’s add our external state to the Converter component to fully test it and see if it works at all.

We import the entire list of elements we need.

Next, we create variables for them inside the Converter component. The history variable should use the useSelector hook on the history state to store it in the component, and the dispatch variable allows you to quickly call the useDispatch() hook.

Next is the matter of technology. To display the history state in the interface, we simply write the corresponding variable in the return method of the Converter component. And to change it, let’s create a separate key that activates the dispatch method.

In our case, we need to pass a request to Redux to run the updateHistory method with the result argument (since we plan to pass the calculation value in the converter).

A similar interface will appear. It shows the result of converting one measurement unit to another and a button to send this value to the history state. 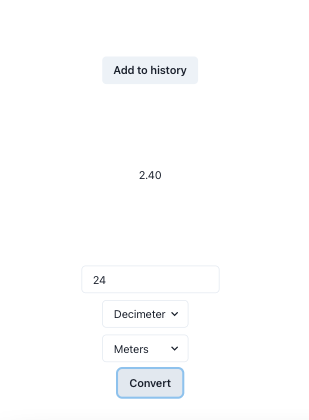 When you click on this button, the conversion result will go into the Redux history state and will be displayed above.

The problem is that we don’t get the benefits of Redux because the history is not visible in other elements. We need to show the state in the interface at a higher level so that we can always see it, not only when working with the converter. After all, according to the original plan, the function of changing the state should work from several different components.

Therefore, we import the same data from Redux and historySlice, but already into the App component. There, we will create a variable history that addresses the hook using the Selector, and return it to the turn.

Now you can add the Add to history button to any program component, including the calculator. It will work in the same way as any other similar buttons in the application. 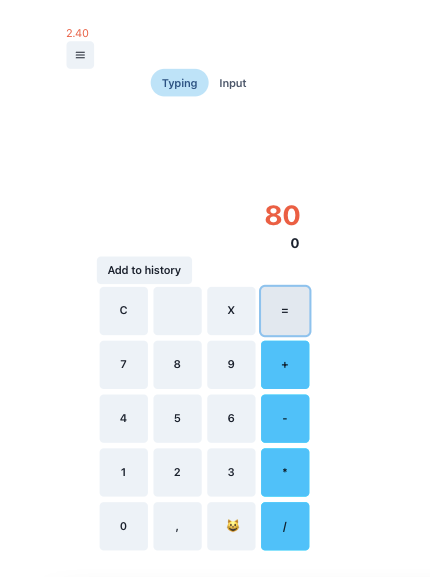 You can slightly modify the contents of the history variable in the App component so that the state items are displayed in individual buttons.

The following interface will appear. 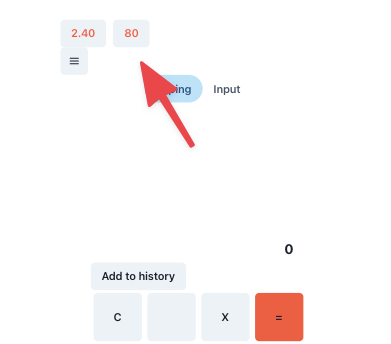 Also, in our application, Redux can simplify the process of implementing Drag&Drop.

What is a Router

Router is a popular tool for React programs and one of the most important components of any web application, which allows you to associate individual components of your project with specific addresses in the browser.

Each component for the browser looks exactly like a separate page, which allows you to leave links to individual components of the program. For example, in our case, you can create a link immediately to the calculator, and not to the converter (or vice versa). It will also help save the state of the program when it is restarted. Now when pressing F5, we automatically switch to the calculator.

We install the Router

We will use React-Router. There are other routing options, but I found this one to be the easiest. It is the easiest to understand, and the installation process is included in one command.

After the command is finished, we proceed to the routing settings in the application.

Connect the Router to our program

The router is connected quite easily, as well as other third-party libraries. You just need to wrap the application in the component that comes with React Router.

Import the required component into index.js.

Now we turn our program into a router. You need to “put” everything below the ChakraProvider in the BrowserRouter, as shown in the screenshot.

After that, we go to the routing settings in the App.js component. Since this is practically the root of our program, from here we will move to different parts of the tool we have created.

We import here three components that are responsible for the basic functionality of the router. This is the Routes block, which will hold all the paths (links to individual components of the program), the Route block, which stores a separate component for rendering, and the Link element, which allows you to switch between different elements of the page.

Now the paths need to be placed in the interface. You can safely write them in the return method of the component that is the root of your application. All of them will not be displayed at once, because routing works as conditional rendering, that is, the content displayed on the page will depend on the currently selected path.

It remains to make an interface for switching between paths. We already have a menu that is responsible for conditional rendering (that is, the one that allows you to select the value of the application variable inside the App component). Here we modify it, replacing the buttons that change the value of the application variable with Link elements, as well as the URL address in the address bar of the browser.

Here’s what the app will look like when you launch it (note the address bar). 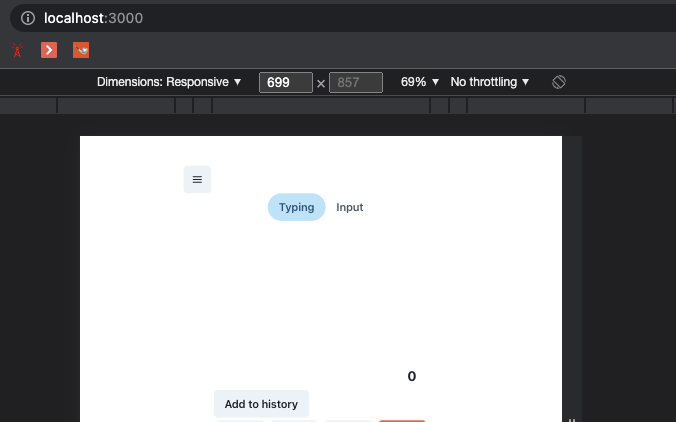 And this is what will happen if you go to the converter in the menu. 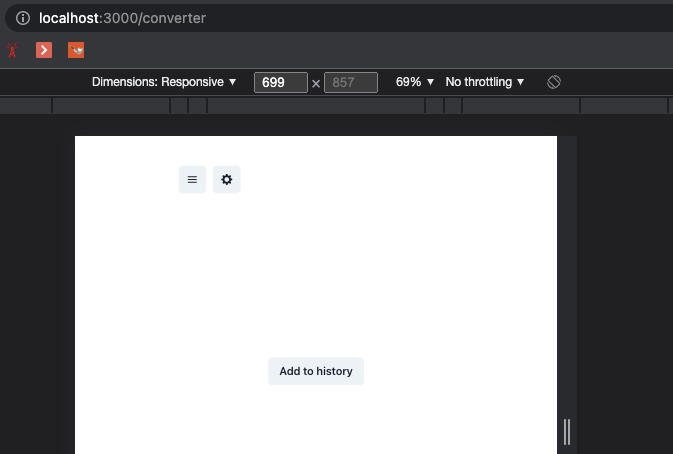 Now when entering the address manually /converter you’ll get to the right part of the app, and that app state won’t be reset on page reloads.

We explored two important elements of React applications that are often used in projects of various scales. Even if they are not needed in such a small application as a calculator, they will be needed in other web services.