Skip to content
Home Articles We create a calculator-converter based on React. Part 6: Add a converter

We continue the development cycle of the calculator-converter. We have already added most of the necessary options to the calculator, it’s time to understand how the converter could work. Let’s start with the simplest distance conversion and gradually add other types of metrics and formulas.

Previous material: Converter calculator based on React. Part 5: Add a history of results

Create a menu to select the type of interface

We can’t just embed the converter in an existing calculator interface. We need to make a separate interface and a special menu so that we can go to the converter and back. Therefore, we will start with the implementation of such a menu and the decomposition of the App component into new components.

First, load the Chakra-style icon collection to add a Burger icon to the menu as a button to switch to other modes. To do this, open the terminal in the root directory of the project (if you work in VS Code, just press the key Ctrl + `). At the command prompt, enter a command to install Chakra icons.

We can now export icons to React components. 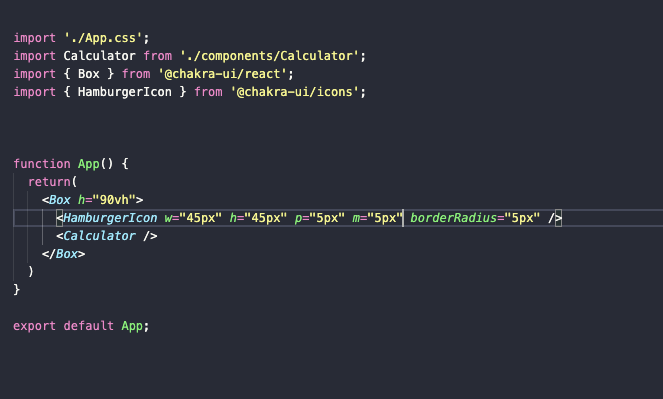 The icon is there, and now we need a menu to switch between the converter and the calculator. To do this, create a Menu function in the file App.jsx, and inside put a primitive block Box, which will house the menu interface.

The menu for selecting the operating mode of the program can be a simple list of switches. To work with it, we import two more types of elements from Chakra:

From the added components we will collect the disordered list from three menu items: Calculator,, Converter,, Settings.

The first one is ready, the second one will be made in the near future, and we will deal with the third one at the end. The following template will appear: 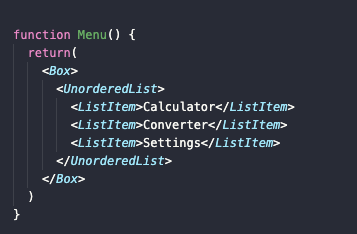 The next step is to add an animation of the menu appearance. By default, it is displayed on a permanent basis, but we need to hide additional options until the user needs them. The SlideFade and useDisclosure components from the Chakra library will help us with this. We import them into our application:

You then need to wrap the entire menu interface in the SlideFade component. That is, everything that is part of the Box in the Menu component.

Next you need to create a special state (unique to the Chakra interface) using Disclosure in the Menu component to control the appearance and disappearance of the menu locked in SlideFade. It contains a variable and a method.

Now you need to bind the isOpen element as an attribute for the SlideFade component. It is necessary that the menu is displayed in the interface only if the variable changes.

And the onToggle method binds to the burger menu icon.

We will also add an attribute unmountOnExit SlideFade unit so that it is removed from the tree of HTML elements and is not available in the “invisible” state. Otherwise, the user may accidentally click on one of the settings, although the screen does not have this block at all.

The menu itself must be built into the App component and placed above the calculator. 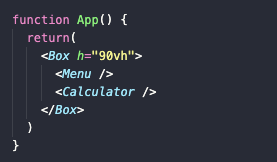 I recommend adding a position attribute with an absolute value to the Box block in the menu, so that the list of SlideFade items appears on the screen and does not move other parts of the interface in parallel.

Also, it may be better to use something like unstyled list, that is, instead of UnorderedList to import into a List file and turn the menu to it. Then unnecessary points will disappear from the interface and the list items will stop moving sideways.

Now we have all the necessary components and you can proceed to the implementation of the logic of switching modes of operation of the program.

We make the switch of operating modes of the program

The logic for our menu may be similar to the one we used to switch between InputCalc and ClickCalc. And let’s do it – we will change the state of the App component and on its basis choose which of the interfaces to draw on the screen.

To do this, create a mode state inside the App function.

Here we declare the application variable to store the component that is displayed now.

Then you can simply copy your own code from other parts of the program. We already have one switch, you can repeat it in the App file. We make function chageAppType.

As you can see, the logic is repeated – check the active type of component at the moment and replace it if it does not meet user requirements.

We add a switch design. More precisely, copy it from Calculator.jsx, replacing only the variables used. For example, application instead of calculator and Converter instead of ClickCalc.

Replace the component to the {application} variable. And here at a component

you will need to wake up the props with the changeAppType function.

By this logic, there is a small problem. No matter which list item we click on, it will still switch to the opposite component. That is, there is no fixed and predictable behavior. Therefore, we will still have to make some changes. We will abandon the changeAppType function and delete it.

We will leave the switch design the same. As props in the Menu component we will transfer function setMode. That is, from the menu, we will directly affect the state of the App component, and not check what the current state.

Replace the list items with the Button buttons and attach the function change function of the App component to each button.

Done. Now the menu is more logical and clear where each of the items leads.

We implement the functionality of the converter

Let’s start with a primitive version of the converter, which is able to convert values ​​from one metric unit to another. Let’s take the simplest example – meters and centimeters. Let’s start the implementation of the interface with them, so as not to spend a lot of time, because the basic logic is enough for you to be able to work out the logic for any other options for units other than dynamic. We will analyze them separately in one of these materials.

To begin, create a basic element Select, in which you can select one of the types of metric units. But before that, you need to import the appropriate type of blocks from the Chakra UI library. import { Select } from '@chakra-ui/react'

You can now “fold” the basic version of the Select element. It is a list with two values: Centimeters and Meters. Both need to be signed, and the following code will come out:

This code must be duplicated, because we will choose the units of measurement in two parts of the interface. We will choose what to convert and in what. To do this, create a function-component Converter and from there return the Flex-block with two Select.

We will add Input to the Select blocks to the company. In it we will enter a value that will be converted in the opposite direction. Give it a numeric value so that you can’t enter letters.

Below we add a button that starts the conversion process. It will activate a special function that is responsible for both the conversion and the display of the result in the interface. In our case, a fairly simple button labeled Convert.

Now a few preparatory steps before implementing the conversion logic directly. Let’s create two states: one will be responsible for the value of the Input field, and the other will store the result of the conversion.

We also need to create two referents to directly access the Select elements in the converter interface.

For now, let’s just call them first and second:

useRed is a hook function that allows you to interact with HTML elements within a single React component. You do not need to search for it manually using the queryselector method. You have something like a specific name for the HTML element.

Next we need to create a function to change the value of input, or rather to bind the change in the state of input when entering characters in the line Input. To do this, add the appropriate attribute to the corresponding HTML element.

Here we attach the first reference. To do this, find the block with the necessary data and specify as the attribute ref the name of the reference created inside the component. For example, in the case of one Select will receive a reference first.

This allows us to obtain information about the selected unit of measure by specifying the variable first or second in the body of the methods used in the Converter function.

We create a convert method. This method first checks which unit is set in the first Select. If it is meters, then the method goes to the formulas developed for this unit. In our case, the switch construct is used, which selects the formula according to which unit of measurement is specified in the second reference. Here is the whole code item by item. 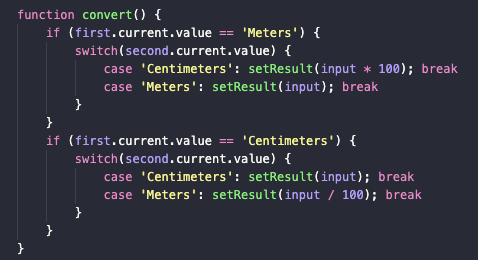 We will repeat this code for centimeters. That is, we create a check for compliance with the first reference value of Centimeters, then again include the construction switch, but with formulas for centimeters. For example, to convert centimeters to meters, you need to make a case that divides the input by a hundred.

The basic converter is ready. Now all you have to do is add new formulas and add new values ​​to the interface elements. I recommend making formulas to other functions or components to store them in a separate file. Here they can take up too much space, interfering with the perception of the code.

If you have questions, leave comments. Next, create a more advanced converter that retrieves data from the network.